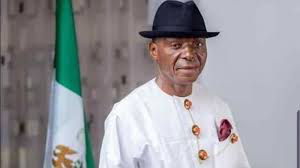 Our attention has been drawn to a certain recent local media report linking the very distinguished Senator James Ebiowou Manager with a ridiculous zoning formula for the emergence of the governornorship candidate and running mate of the Peoples Democratic Party (PDP) in 2023. But for the sole purpose of setting the records straight, reacting to the preposterous publication would have been unnecessary especially considering the fact that the said “breaking news” has not been echoed in any reputable national newspaper in the country, apparently because the media organisations could read between the lines and separate the wheat from the chaff.

According to the report, the respected fifth-time senator representing the good people of Delta South Senatorial District in the National Assembly had agreed to not only be part of a mock PDP gubernatorial primary in 2023, but he has also accepted to be deputy to Olorogun David Edevbie, who is currently Chief of Staff to Governor Ifeanyi Okowa.

The report also claimed that the agreement was brokered by a PDP political leader and former Governor, Chief James Onanefe Ibori, accusing of the ex-governor of desperately seeking to maintain his godfather’s role in the politics of Delta State.

The attention-seeking newspaper further claimed that the said agreement between Senator Manager and Edevbie, which was allegedly at the instance of Chief Ibori, had triggered angry reactions among the Ijaw in the state who reportedly felt betrayed by the decision of their illustrious son and distinguished Senator of the Federal Republic to play second fiddle in the next governorship dispensation in Delta State.

However, the distinguished Senator James Manager has urged respected PDP leaders and party members as well as his numerous supporters across the state to rest assured that the reported deal for the 2023 governorship candidature of the PDP does not bear the imprimatur of Senator Manager, who was the pioneer chairman of PDP in Delta State.

We wish to state, with due sense of modesty, that Senator James Manager, who has remained a formidable and dependable pillar in the PDP, is too big to be number-two to anybody in the state come 2023 by God’s grace.

The said outcome of a recent imaginary poltical horse-trading between unidentified Ijaw political leaders from Delta South in the “Ibori camp” and their counterparts from Urhobo ethnic extraction in Delta Central, is clearly the handiwork of some laggards and busybodies that are hell-bent on causing political distraction in the state.

The story of the purported agreement to withdraw or stepdown during the party primaries and then collapse his political structure for Olorogun Edevbie, or anyone for that matter, should be ignored by all PDP faithful and well-meaning Deltans in general.

A shadowy group masquerading as the protagonist of “Ijaw Political Renaissance Project (IPORPRO)” and led by one Kpakiama Golden might be fronting for some faceless aggrieved politicians whose real motive remains unclear, but its handful of members, no doubt, speak for themselves only and not for the politically conscious Ijaw Nation.

Nonetheless, we remain proud about the humble and focused disposition of Senator Manager despite his towering leadership stature and unassailable string of achievements in the political sphere in Delta and Nigeria at large.

His meteoric rise from the position of Chairman of Bomadi Local Government Area to becoming the first state chairman of the PDP in 1998/99, is a testament to Senator Manager’s political pedigree as grassroots leader, mobilizer and courageous role model.

Before his state party chairmanship and subsequent election in 2003 to represent the people of Delta South in the National Assembly, Senator Manager was a commissioner in the administration of late Governor Felix Ibru.

In the Senate, where his wealth of experience as a lawyer has seen him serving in many committees charged with various oversight functions, Manager has consistently exhibited the qualities of a patriotic Nigerian, god-fearing leader and dependable political ally.

A distinguished recipient of the national honors award of CON, he was instrumental to the attainment of PDP’s practically invincible status at all elections since 1999 in the present democratic dispensation in Nigeria. He has always placed his cards on the table instead of engaging in clandestine political bargaining.

Over the years, Senator James Manager has been touching lives positively but he never proclaims such at rooftops. He remains a focused gentleman and he will definitely continue to impact the lives of more and more people in future. The mischievous activities of few political detractors cannot stand between him and his commiyted service to the people.

2023: Okowa urges Nigerians to support PDP to rule the country

THE SPEAKER OF THE DELTA STATE HOUSE OF ASSEMBLY, RT HON SHERIFF OBOREVWORI  AT THE…