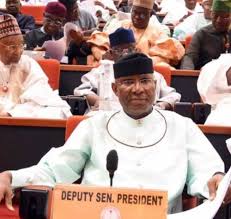 A bill for an Act to provide for the establishment of a Federal Polytechnic Orogun, Delta State, passed Second Reading in the Senate on Thursday.

The bill titled: “A bill for an Act to Establish the Federal Polytechnic Orogun, Delta State to Provide Full-time Courses in Technology, Applied Science, Management and other Fields of Studies and to Make Provisions for the General Administration and for Related Matters, 2019 (SB. 34)” is sponsored by the Deputy President of the Senate, Senator Ovie Omo-Agege.

In his Lead Debate, Senator Omo-Agege who represents Delta Central Senatorial District, pointed out that the Institution would bring education closer to the people in the area.

According to him, numerous admission seekers in the area earnestly yearn for this Institution outside the already existing Petroleum Training Institutes.

He noted that when established, it will create more admission opportunities for youths, even as he expressed regret that tertiary admission seekers are denied admissions ‘based on quotas and ‘catchment areas”.

He said: “The absence of such an all-imbracing Federal Academic Institution with statutory approval to develop a wide range of professionals is a limitation that is of serious concern to our leaders and people. It is a huge challenge affecting a great majority of our otherwise qualified tertiary education admission seekers who are often denied admissions based on quotas and ‘catchment areas’.

“By establishing the Federal Polytechnic Orogun, this Senate would be creating an institution that would, amongst others, develop top quality human resource portfolios in many areas of need in both the private and public sectors; design, develop and deliver cutting edge education and training programmes for our professionals; engage in strategic research and development activities for broad national development; and take leadership roles in promoting the economic development of the immediate community and the society at large through specific education, training and outreach activites”.

After several contributions from lawmakers, The President of the Senate, Senator Ahmad Lawan who presided over the session, put the question to voice vote and it was unanimously approved.

He thereafter referred the bill to the Committee on Tertiary Institution and TETFUND, to report back in four weeks.

In his remarks, Lawan also threw his weight behind the Bill, stressing that education is an essential ingredient for building a prosperous society.

He said, “There are countries that survive without natural resources. Their people are given very functional and relevant education and that is why they can function. They can take any job, they can work anywhere and in fact, they export their people’s knowledge, capacities and skills”.

In his word,  “We have to do the same. Our system has to be functional”.

“What this Bill seeks to do is to create that critical mass of our people who will be trained in this very vital sector of our economy. No amount of investment will be too much because the economies actually depend on the ability of the people that they have trained,” he stated.