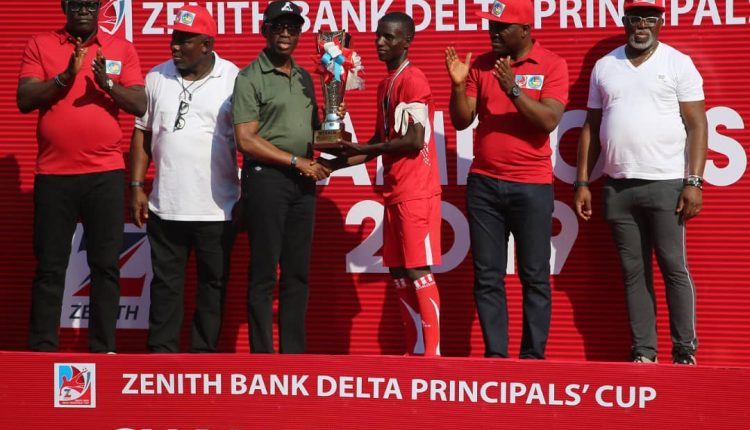 Delta Governor, Sen. (Dr) Ifeanyi Okowa, on Thursday attributed the sterling prowess of the state in sports to the initiative of late Samuel Ogbemudia as military governor of defunct Bendel State.

The governor made this known at the final of Zenith Bank Delta Principal’s Cup Football Competition at the Stephen Keshi Staduim, Asaba.

He said that Ogbemudia pioneered the concept of catching athletes young and developed it through regular competitions among the young  people and their schools.

The governor, who commended Zenith Bank for sustained sponsorship of the tournament, said “it is gladdening to note that we have kept hope alive, and partnering Zenith Bank, this competition has entered its fourth edition for which I must truly pay tribute to the management of Zenith Bank for consistently funding the competition.

“We started it four years ago and it is a beautiful thing that most schools are participating in the tournament; we have progressed as we have the Headmaster’s Cup and the and others involving various categories of athletes.

“It is good that we are reinventing this competition; during the time of late Samuel Ogbemudua as the Governor of Bendel State we were made to understand that we can use our physical strength to develop our talents in the educational sector.

“It is on record that 612 schools participated in this edition of the tournament from the beginning and it is my hope that every secondary school in our state will participate in the competition as you can imagine the level of excitement in those schools that participated and the raw talents that we have discovered in this tournament.

“We are looking forward to the bank taking over the sponsorship of the Headmasters’ Cup and we will continue to also encourage well-to-do Deltans to sponsor events and partner with us in developing our state knowing that government cannot do everything alone; we need to collaborate in making life more beautiful for our people.

“We have made a promise that the winner of the tournament will go home with a bus and the bus is available, but the most important thing is that we are able to catch them young and develop their talents.

“As we go into the future, we nurture the talents to remain at the top in any sporting competition organized in the country; I am happy with the quality of football I am seeing this evening.”

In his remarks, Executive Director of Zenith Bank, Mr Henry Okoh, on behalf of the Group Managing Director of the bank, assured that the bank would continue to be part of the tournament as part of its social responsibility and thanked Okowa for his passion in the development of sports.

Earlier, the Commissioner for Basic and Secondary Education, Chief Patrick Ukah, had said that Gov. Okowa gave the necessary support for the tournament to be held and expressed gratitude to him.

College of Commerce, Warri, emerged winner of the competition after defeating Zappa Mixed Secondary School, Asaba, 2-1 at the end of regulation.

With the victory, College of Commerce went home with the sum of N1 million and a brand new bus while Zappa Mixed Secondary School got the sum of N750, 000.  There were lots of prizes given to the teams and players at the event.