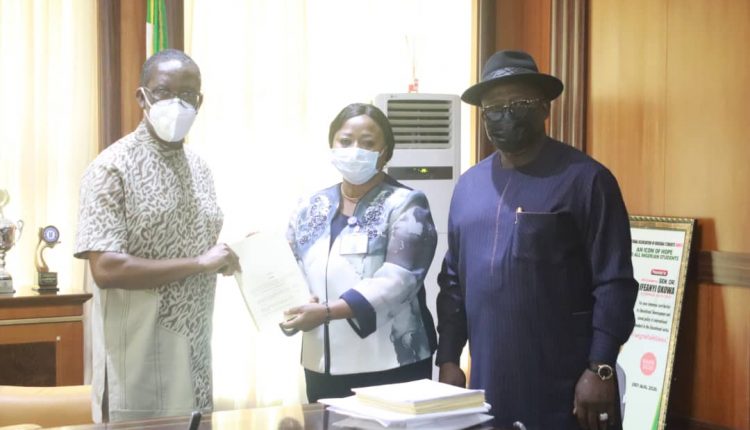 Delta Governor, Senator (Dr) Ifeanyi Okowa, on Thursday signed three Bills for the establishment of new universities in the state.

Speaking at the ceremony at the Government House, Asaba, the governor commended the House of Assembly for the prompt passage of the bills. 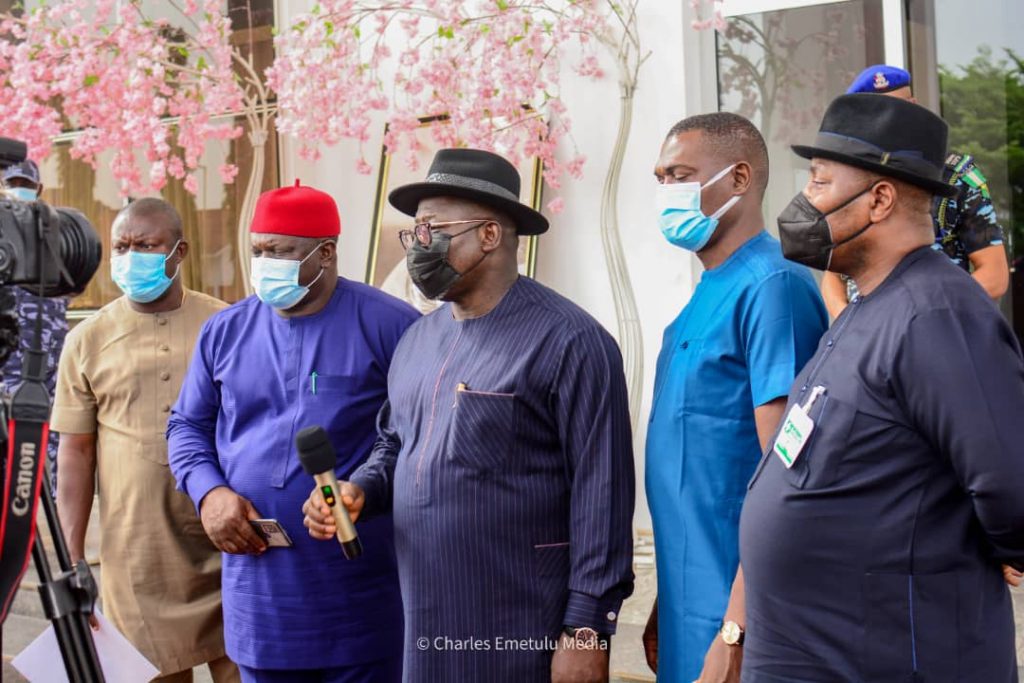 The bills, which were presented to Okowa for assent by the Speaker of the Assembly, Rt Hon Sheriff Oborevwori who was accompanied by his Deputy, Rt Hon Christopher Ochor and other principal officers, were for the University of Delta, Agbor; Dennis Osadebay University, Anwai and the University of Science and Technology, Ozoro.

He recalled that the bills were sent to the House a few weeks ago and that in spite of prevailing challenges the lawmakers deliberated on the bills and organised a public hearing to have inputs of the general public on them. 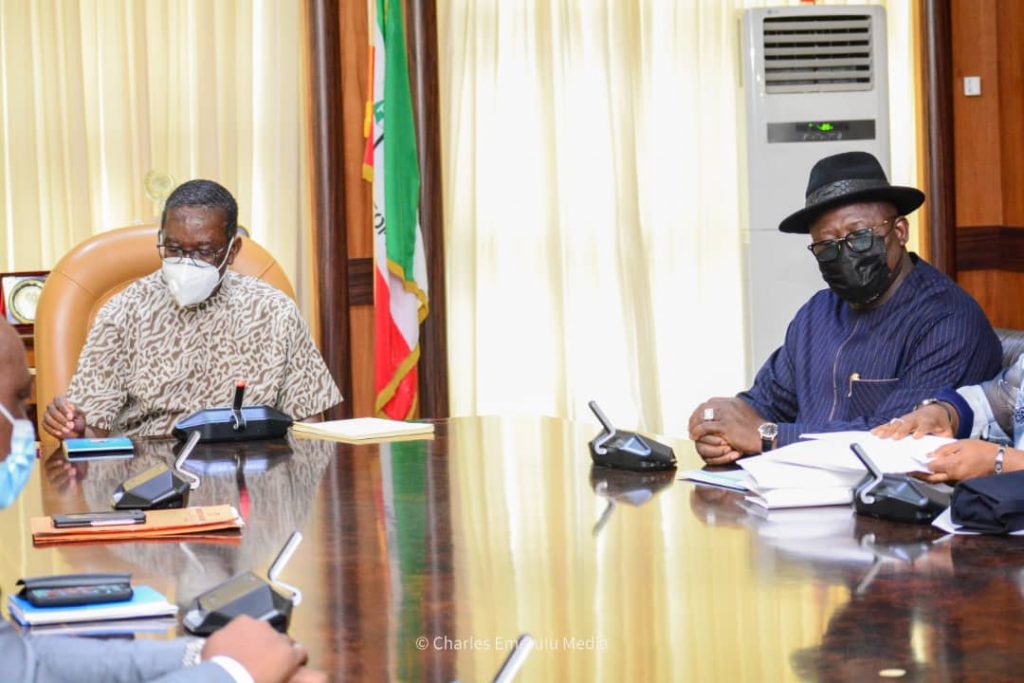 He also thanked the Ministry of Higher Education for efforts in bringing the establishment of the universities to fruition.

The governor said, “I am glad that I have assented to the three bills today and I am thankful to the House for their usual cooperation.

“We looked at a wide range of issues during our Education Summit and it became obvious that we needed to take certain actions as they affected the education of our people. 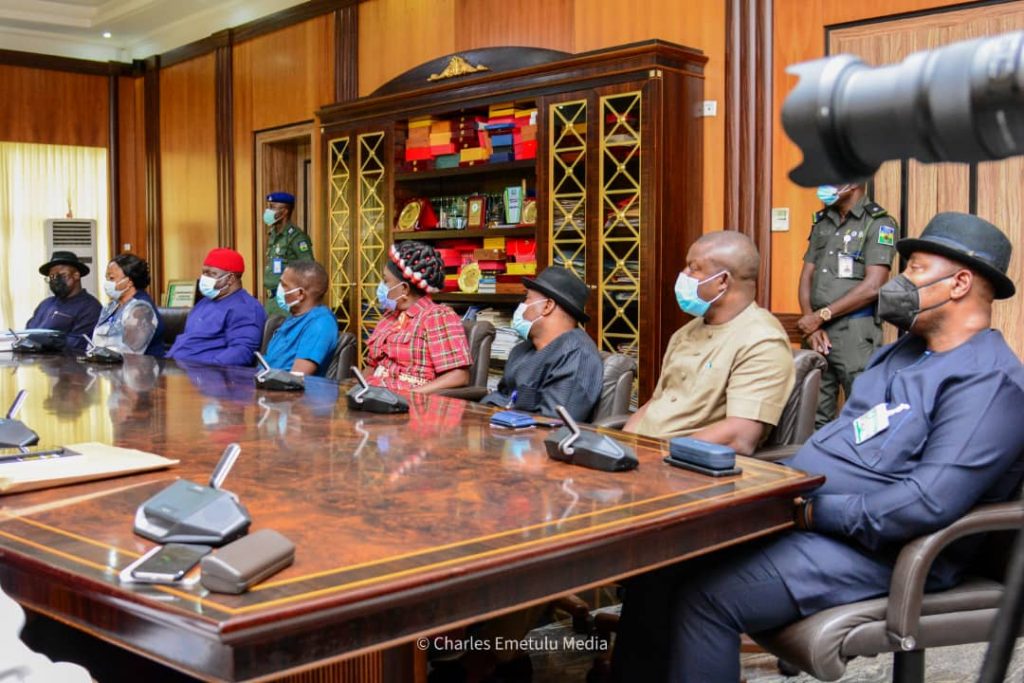 “Our people are always in the quest for higher knowledge and every year, Deltans have one of the highest applications for university education across Nigerian universities.”

He said the various higher institutions in the state were established because of the people’s quest for knowledge, adding that the new universities would help to consolidate the educational system in the state and create more spaces for others to gain higher education. 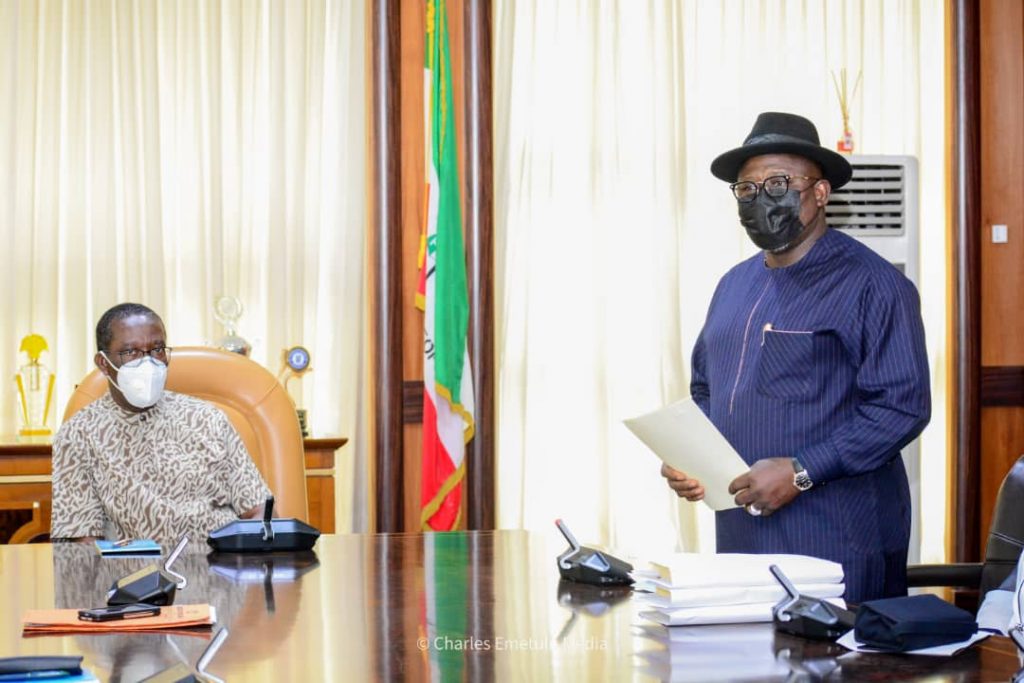 “As our institutions are today, they just require little more funding to be upgraded to universities.

“As the students of our technical education start to progress from the technical colleges to the polytechnics, they also have a chance of going further to the University of Science and Technology. 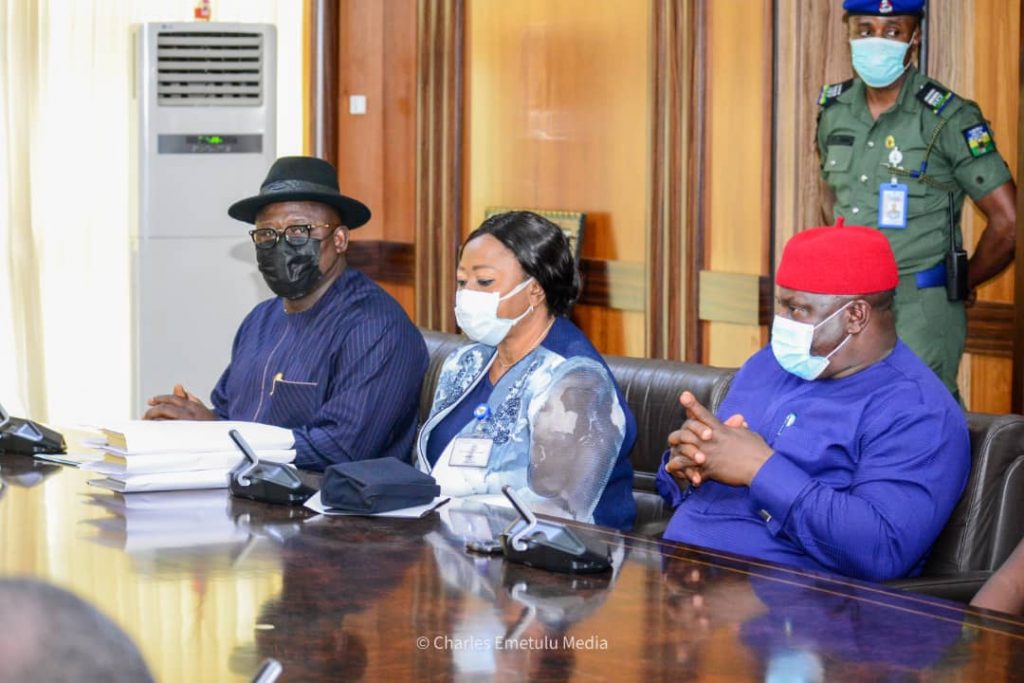 On the concession of the Asaba Airport, the governor urged Deltans to keep faith with his administration as he was elected to govern the state in their best interest. 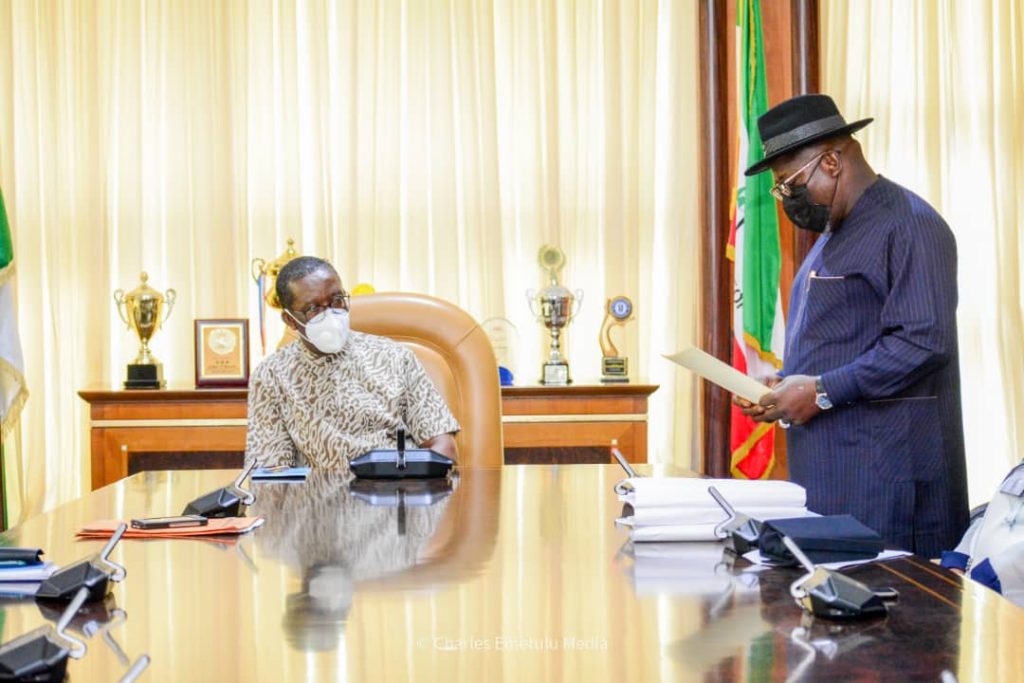 “We have been able to build the airport to the stage it is today and we thank the administration of former Gov. Emmanuel Uduaghan for the vision of building the airport.

“Due to competing needs, it is not possible for the state to continue with the development of the airport. We are beginning to spend more than we are able to get from the airport.

“We went through a very rigorous process in getting a Transaction Advisor who led us through the bidding process before arriving at the consortium that won the bid.

“Obviously it is a lot of input that is expected from them and in the next three to five years, we will begin to reap the benefits of the decision. 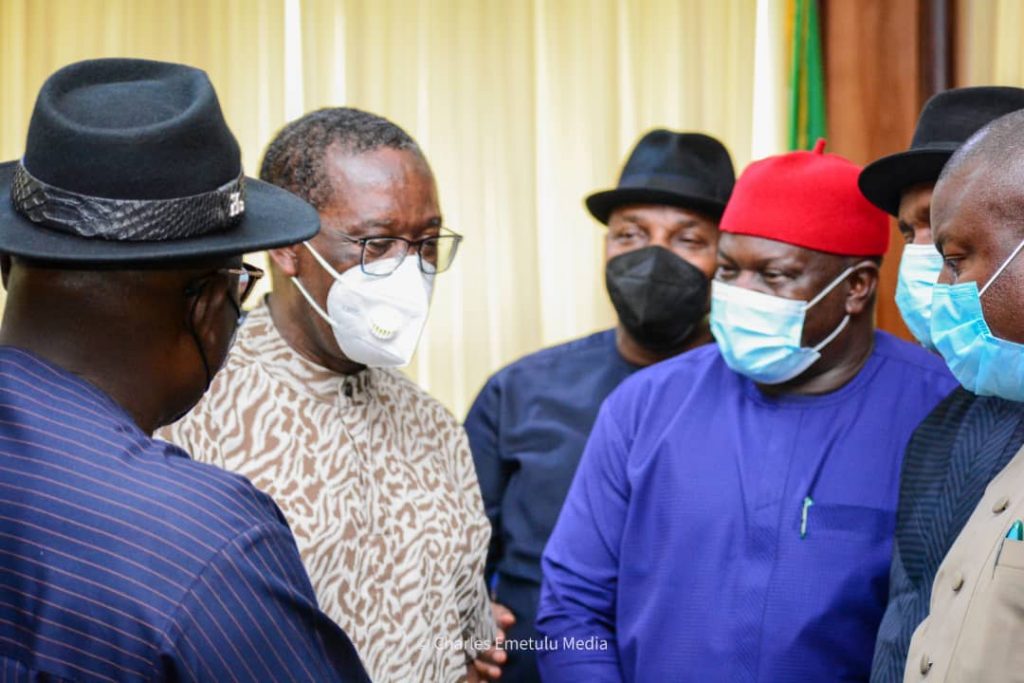 “Rather than making losses to the Concessionaire, beyond bringing the airport to our dreams, they are to pay the sum of N100 million yearly and 2.5 per cent of their annual turnover as royalty to the state.

“Deltans should trust the government they have voted into power even though we appreciate that people are entitled to their opinions.

“We will continue to stand on the side of our people to do the right thing in their interest,” he stated.

Earlier, Rt Hon Oborevwori had said that the bills went through rigorous legislative processes to ensure that Deltans got the benefit of the enlarged and enhanced tertiary institutions in the state.

He said that the passage of the bills, especially for Dennis Osadebay University, would help to immortalize the late Premier of the defunct Midwest Region.

The speaker said that the House held a public hearing on the bills where the views of stakeholders were aggregated into the passage of the bills. 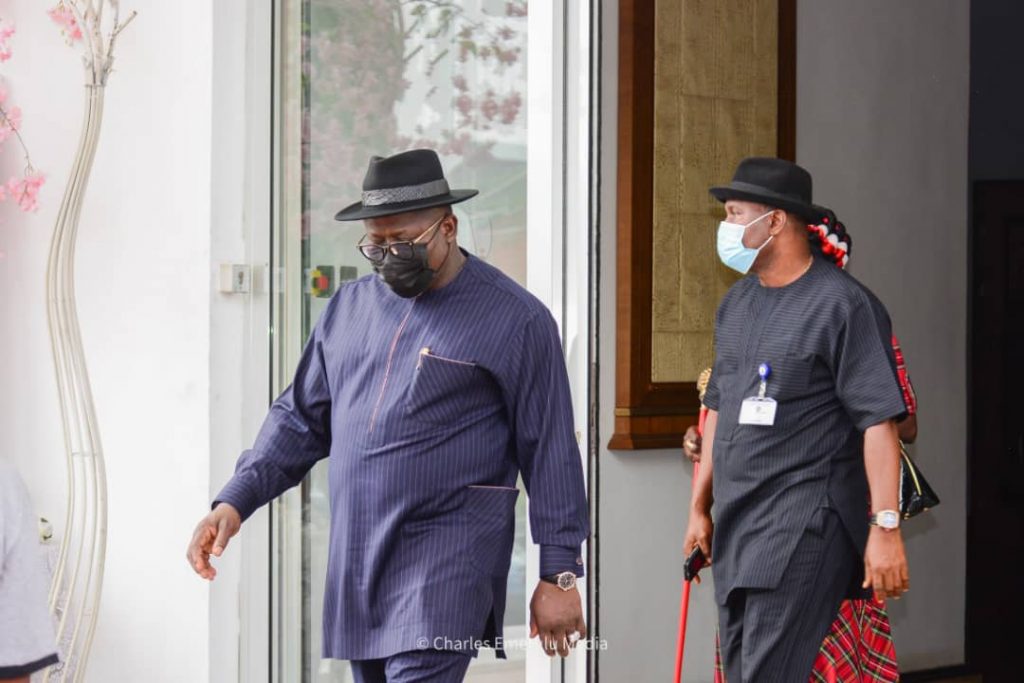 According to the Speaker; ” Your Excellency, you may wish to note that, a massive publicity both on the Electronic and social media were carried out on the three bills, wherein during the Public Hearing, different stakeholders, civil society and non-governmental organizations were represented. Their inputs and presentations helped in shaping the outcome of the bills being presented today. Your Excellency, during the Public Hearing, your visions and insights in presenting the bills before the house were applauded by all and sundry”.

The Clerk of the House, Mrs Lyna Ocholor later presented the Bills to the Governor for his assent.

IMAGES FROM THE SIGNING OF THE UNIVERSITIES BILLS ON THURSDAY, FEBRUARY 25, 2021 BY THE GOVERNOR OF DELTA STATE

IMAGES FROM THE COMMISSIONING CEREMONY OF DUALISED OKPANAM ROAD IN ASABA