Their Dubai. My Nigeria… 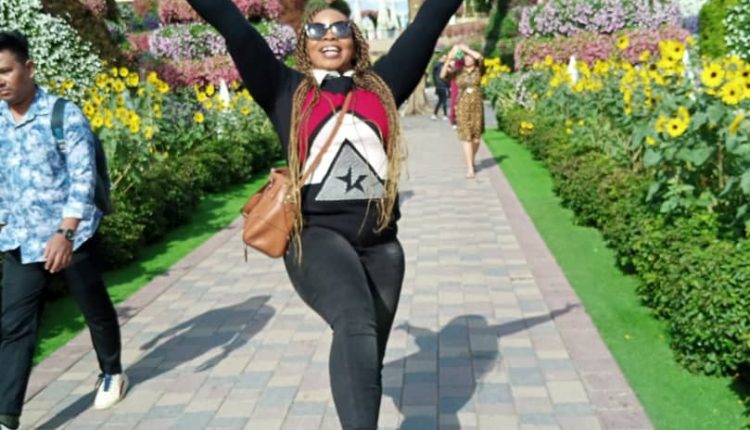 She laughed with infectious excitement. “Eehn, let’s go to Dubai so you can clear your head. When you return, you can continue with your TrendFM trouble.”

I thought she was joking. I knew we weren’t in the best financial state then. For someone who had just finished handling some big projects, extra expense was like a pipe dream, so I rolled my eyes in disbelief.

Then she shot at me with finality, “Ijeoma, you can stay back, but me, I’m going to Dubai”. That was when it dawned on me that she meant business.

On January 8, 2019, my Managing Director; Agatha Amata, a colleague at RaveTV; Amina Attahiru and I were airborne to Dubai United Arab Emirates, UAE.

We flew on the wings of Emirates Airline. It was my first time using the airline. Nestled in Boeing 777-300ER, the first thing I noticed was so impressionable: the courteous airs of the flight crew from the time I stepped into the aircraft. They all wore what has formed their identity over the years. The interior of the plane was impeccable.

I guess these are expected of an international brand.

Some are afraid of flying. Here is the lady who holds the world title for flight phobia. I often announce my fright as soon as I step into any plane while I woo any neighbor close by, so they don’t freak out if I grab someone at takeoff and landing.

I get so quiet before boarding as if I am about to face judgment. Nothing has been able to assuage my anxieties.

This fear, however, has the good side –I tend to know so much about planes and flying. I take time to study and compare aircraft. I also try to study the movements of these big controlled birds. My fear drives me to know the accident rates of major airlines and aircraft. Most times, I follow the map/information chart instead of seeing movies.

On Emirates, I noticed that the takeoff was very smooth. The pilot was not in a haste to get the plane into the skies within minutes like I had experienced with one Airbus flown by a Nigerian airline on London flight.

While the 777 was rolling on the tarmac for departure in Lagos, I did not get the usual dizziness. I watched as the transworld airliner glided from a thousand feet plus to two thousand, then three thousand and so on until it perched on 15 thousand feet for some few minutes before it continued its seamless climb.

The landing of the Boeing was even more soothing. It almost lured me to sleep as the tyres serenaded the tarmac in soft kisses. It neither nosedived nor landed like it fell off a hangar. Apart from the pressure on my ears and the fact that I followed the flight, I would not have known when it made its final descent at Dubai Airport.

Minutes after my feet touched Dubai soil –first time in my life –I could not believe my ears. “Oyah shake body, shake body” the music of Nigerian crooner, Skales greeted us at Dubai airport. I thought I was on Nnebisi road Asaba! Just that the strange beautiful land that regaled my wide eyes made it look like a confusing dream. I was so excited. Nigerian music is on a global arena, a tribute to the indomitable spirit of Nigerian youths. Even at Dubai Miracle Garden, it was Nigerian music that played. By the way there were more white tourists at the garden than blacks.

In Dubai, the immigration officer, the currency exchange handler, the cab driver, the Hotel staff members were all very courteous attending to us at night.

I imagined how groggy my brothers and sisters here in Nigeria would have been at that late time no matter where they worked. You can even get to the reception of a hotel without meeting anyone. The ones on duty at the hospitals are also in this league of champions.

In all these tours, the drivers were all polite and friendly. None was exploitative or grovelling. We were entitled to buffet breakfast at our hotel and the staff lived up to expectation. They were amazingly efficient.

Our guide gave us the necessary information for the village market so we would know how to bargain. It was at this market that I met one Pakistani I named John. Haughty yet lively, John believed his shop had the best quality goods while he tried to impress us with a few Yoruba words.

Dubai thrives on trade and tourism and stops at nothing to protect these. According to our guide and what I observed too, the government recognises and makes painstaking efforts to preserve its major economic driver; Tourism. Tourists must be handled with utmost care. I call that setting its priorities right.

I also noticed that there are no manufacturing companies. Maybe that explains why I didn’t feel Chinese and Igbo presence. There was no Chung Xing or Uba & Sons.

Dubai is a very neat city! The sign in buses: “No Eating. No Drinking. No Smoking” says it boldly –everything is so organized.

For a country without water, the city is next to heaven. By the way, petrol is cheaper than water in Dubai. There is steady power supply in the city so I did not rush to charge my devices like I was subconsciously doing when I first travelled overseas seven years ago. This time I knew I was not in Nigeria. I also did not need to check if Sunny, my gateman, had switched on the water pumping machine.

Although an Islamic state, the government is liberal to tourists. You dress freely within the confines of decency. This is not readily available in some other Arab/Islam dominated regions.

Arabs of Dubai love life. The best things in life are in Dubai. Mansions everywhere; breathtaking skycrapers kissing the clouds; exotic eye popping cars pimped with golden name plates; malls filled with the most beautiful vanities of life; and gleaming rosy roads akin to the shining streets of heaven as described in the Bible. Arab males called Emiratis are handsome and rich – very rich, most of them. They do not work. Their luxuriant hairy hands do not touch most jobs; odd jobs like cab driving, hotel service, trading among others. Such menial jobs are for Indians and Pakistanis. The Emiratis are royals, Kings and princes. Born to be served .Their wealth is exclusively for them. They share with only their women. Not foreigners. Emiratis are discouraged from marrying non aborigine, even if you are Agbani Derego or Miss Universe. Not even Naomi Campbell can easily win an Emirati’s hand in marriage. It is their belief. They love and marry their girls. That is their way of life, their fancy, their culture. Sorry Nigerian girls!

Dubai has its challenges, however.

Dubai did not make provisions for almost simple eventualities like rain. While in Dubai it rained. No, not rain; one of Angel Michael’s children rinsed a spoon and this small water messed up most parts of the city. Schools were closed, places shut down, roads became useless. Ordinary rinsing of spoon. You can imagine what would happen when small Uriel takes a shower on top of Dubai.

The government is apparently oblivious of climate change. There are no drainages. Our tour to the Global Village had to be cancelled because the roads were blocked and many parts waterlogged. The areas housing tourists were cleared through concerted efforts.

I guess it was the lack of preparation that made the government embark on cloud seeding when the forecast said it would rain. They had a shopping festival and did not want it ruined. Unfortunately, the clouds refused to budge.

As I made videos of the roads, I wondered what our seven day rain would turn the almighty modern city to. Would it still be the same? Could their wonderful roads stand our topography? The rains from April to October? When the rains form alliance with our kind of filled drainages and other garbages would there be a city left for us to call tourism destination?

This got me thinking. How can these skyscrapers function without power supply? Can Dubai survive a collapse of the national grid? What if light goes off while people are in the elevator at the BurjKhalifa, perhaps at the 100th floor? How do people at the 163rd floor come down or go up at such times? Well, it’s not my business.

Duty calls and home is where Munachimso is. We had to come home. At Murtala Muhammed International Airport, I was welcomed by a strong smell of urine mixed with sweat from underarms that abhor deodorants. The heat from the failed air-conditioning sets helped the porridge to thicken as we meandered our way through immigration. I took a deep breath, inhaled and exhaled my people’s achievements with a smile.

I kept smiling even when I was missing a suitcase and Customs officials were at their annoying best. I liked it that I was back home. What is life without people shouting like you have been quarrelling with them since 1926? How do I know I’m back home when I don’t get that identity urine or Izal smell at our international airport? How do I remember that I’m a Nigerian if my countrymen don’t harass me a little for not buying something for them? I need to be reminded what the rule says.

I saw Dubai; neat by nature. I see Nigeria; naughty by nature

Let them have their Dubai. I stick to my Nigeria where we are used to God and His Angels taking baths without us running away. It is their Dubai and this is my Nigeria.

PHOTO NEWS FROM THE EARLY MORNING WORSHIP BY THE SPEAKER OF DELTA STATE HOUSE OF ASSEMBLY, RT HON SHERIFF OBOREVWORI

HOW TO KILL A COUNTRY

ATTACK ON DR. SAMUEL ADJOGBE; THE MINDLESS DEFAMATION OF A TRUE HERO

ON SHELL MD, TWO OTHERS JAILED FOR DISOBEYING COURT ORDER – LESSONS TO BE LEARNT FOR…