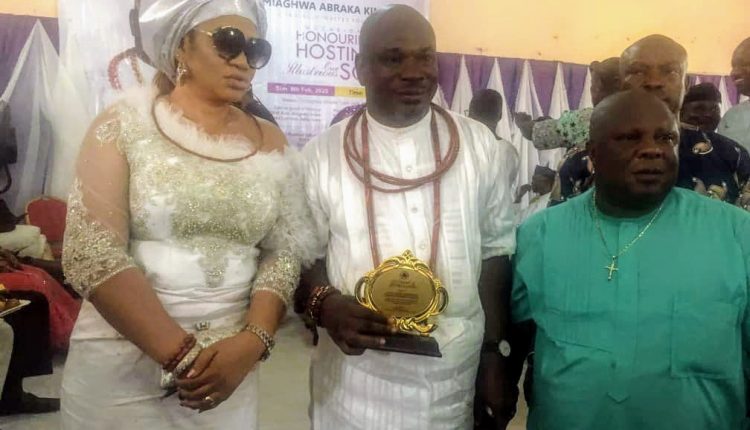 February 9, 2020, will remain a special day in the history of Umiaghwa-Abraka Kingdom, in Ethiope East Local Government Area of Delta State as the kingdom hosted an illustrious son of the kingdom, Chief Sunday Onoriode, with a grand reception.

The hosting of Onoriode was a way of appreciating him for his invaluable meritorious services to the kingdom.

Onoriode, who happens to the Delta State Organizing Secretary of the People’s Democratic Party (PDP), has also distinguished himself both at the state and community level.

The event, which  held at the Oria-Abraka town hall, had in attendance, top government functionaries, indigenes, family and friends both within and outside the state cams to celebrate with Onoriode.

Speaking at the programme, the President General of the kingdom, Chief Arawore, thanked all that graced the ceremony, describing Chief Onoriode as a worthy son of the kingdom and a shining star who deserves the honour bestowed on him.

According to him, despite his busy schedule in Asaba, he always returns back home during weekends to meet with members of the community in order to move the kingdom forward.

Some of the projects in the kingdom associated with Chief Onoriode include three functional boreholes, renovation of classroom blocks in Umiaghwa Primary School, payment of NECO and WAEC enrolment fees for indigent students and distribution of hundreds of farm implements and cash to farmers in the area.

In their separate good will messages, Elumelu, Ebie and Esiso eulogized Onoriode, describing him as a humble and dedicated fellow.

While Elumelu promised to influence NDDC projects to the area in recognition of Onoriode’s excellent performance since he entered the political space in the state, Esiso noted that the celebrant is the most dedicated member of the Delta State Executive Council of PDP.

To the people of Umiaghwa Abraka Kingdom, Esiso said: “Support Onoriode to be returned as the Organising Secretary of the party if you want me to return back as the Chairman of the party in the state.”

Esiso continued: “I am excited with the caliber of people I am seeing here today.”
He urged the community to continue to be proud of Onoriode, adding that from his interaction with him, he has discovered that he is an embodiment of goodness and has passion for the community’s development.

He said: “It is in the interest of this kingdom to protect and pray for him.”

On his part, Ebie recalled with nostalgia how Chief Onoriode pressured him to rehabilitate a school in his community while he was the Commissioner for Basic and Primary Education in the state, adding that Onoriode loves his people greatly.

Also speaking, Chief Edewor said that Onoriode was a diligent and very calculated politician, saying that he is a rising star.

He added: “Thank you for all that you have done in Ethiope East Local Government Area. We are delighted that you are been honoured by your community.”

In his response, the celebrant, Onoriode  said : “ I am overjoyed and short of words to describe how I feel. On behalf of my family, I want to say a big thank you to our kingdom, the Ovie, the council of chiefs and for finding worthy of such reception, I will never ever forget this day.

“I will continue to be a worthy son of Umiaghwa Abraka and will always fly the flag of this community wherever I go. My chieftaincy title, Avwerokere says that I am a role model and I hope continue to live up to this expectations.”

High point of the ceremony was the presentation of an award to the Onoriode by the Ovie, HRM (AVM) Lucky Ochuko Ararile (rtd.), Avwaike I, on behalf of the kingdom.

Appreciate God’s Roles And He Will Do More – Okowa

PHOTO NEWS FROM THE EARLY MORNING WORSHIP BY THE SPEAKER OF DELTA STATE HOUSE OF ASSEMBLY, RT HON SHERIFF OBOREVWORI